*The core of this blog is taken directly from an interview conducted by Mission Network News with Pierre Houssney, our Executive Director, and adapted and expanded upon. To listen to the interview you can do so at this link.

“One of the battlegrounds that I think the Church in Lebanon has not really taken up is actually the battleground for the unreached peoples of the world,” Houssney says.

“Often, the ministry has been focused internally on Lebanon. The churches and organizations have been focused on Lebanon as a missions field and we’re now trying to make the shift so that the nationals will now look at themselves as a missions-sending base to the Middle East and North Africa, and around the world.”

“A major factor to becoming a missions-sending base is prayer.” says Houssney.

Several elements to effective prayer in missions and service to other nations.

Considering the three elements of effective missions prayer, we want to conglomerate all three. Now, we are establishing a prayer center as part of our larger project, The Middle East Center for World Missions, that can enable others to pray informed and efficiently.

Prayer for All Nations Center

The prayer center will be called the Prayer for All Nations Center, “which is a place that’s open to all the different churches from different denominations to join together in prayer that God might extend His hand of Salvation to the unreached people.” 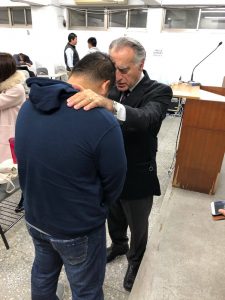 In the prayer center, Horizons will provide displays of photos and information about unreached people groups so believers know how to specifically pray for them.

“I believe that once we establish this place, it’s going to be a place where God calls Lebanese missionaries to serve around the world through praying for these unreached people groups, and that’s our vision and that’s our hope in faith,” Houssney says.

We are about to launch the first version of our prayer center, which will be at our café and bookstore facility. Pastors and Church members are often at our café to use our free Christian resources and to have Bible studies.

“So, we already have a traffic of different churches and in the basement of that facility, we are about to – in the next month or two – start setting up the prayer space with prayer displays that have this information from around the world and all kinds of prayer aids.”

What is the Prayer for All Nations Center going to look like?

We will be creating a comfortable space where everyone feels welcome to pray and worship however they like. We will have Bedouin style couches, one normal couch, a big carpet, prayer rugs, bookshelves and a table. Around the walls will be maps and information about strategic prayer and other nations. We will have flat screens on the walls that will display information in video format about the different prayer needs in other nations. There will be speakers as well as instruments and banners and flags for worship. We will also have a art section with supplies for people to use art in their prayer and worship. Lastly, we are very excited to get virtual reality goggles so that people can pray for other nations while actually walking through their streets!

How to Get Involved

In the near future, we hope to expand our prayer center to a larger space and we will be launching a fundraising campaign early next year to help sponsor it and the many other elements of the Middle East Center, which is the larger project.

“Until then, we just have to use whatever we have. I think he who is faithful with a little bit will be granted more,” Houssney says.

“We’re just trying to strive to be faithful with whatever we have and even if it’s just a small room, that’s Version 1.0. Version 2.0 could be bigger and we’re praying that it will be bigger and that the involvement of the churches will grow as we’re able to have more capacity.”

You can help expand missions work in Lebanon by kick-starting fundraising with Horizons for their prayer center here.

Also, pray that God will use this prayer center and move through the prayers of the people here to catalyze a missions movement. Pray God will spark His work, love, and guidance in Lebanese missionaries and Church leaders to make a difference in other nations.

Finally, you can be on the ground in Lebanon and work with Horizons as they minister to people and give encouragement. Find more information here.