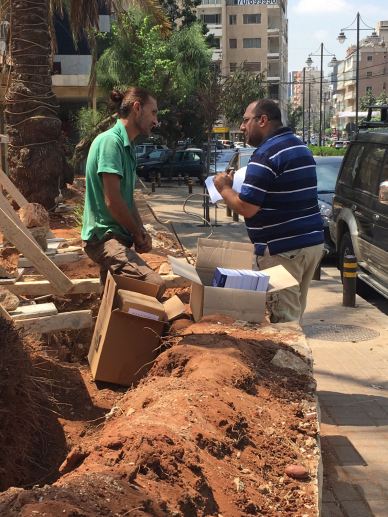 Sako, a Horizons International staff member, lead a team of interns from Taiwan and Sri Lanka on an outreach event in the Jal Dib region of Lebanon where they distributed 180 New Testaments to people passing by who were interested. On the side of the road, Sako met a man named Nizar from a Muslim background who approached asking what our team was doing. Sako explained that they were distributing bibles and sharing the Good News of God. The man was immediately interested and so they talked for a while getting to know each other before the man told Sako a story about a dream he had and just remembered it.

In the dream Nizar saw that rocks and stones started raining down from the sky, and suddenly a Man dressed in white appeared with a large army behind him. The Man in white then told him that if he stands by his side, he will protect him and none of these stones will harm him. Afterwards Nizar saw his family and other people running away. Nizar’s brother approached and told him to run away with him, but Nizar said that he will stay with the man dressed in white.

Sako was very touched by the dream, so they sat down and talked for a while longer and he shared scriptures from the bible about salvation through Christ.