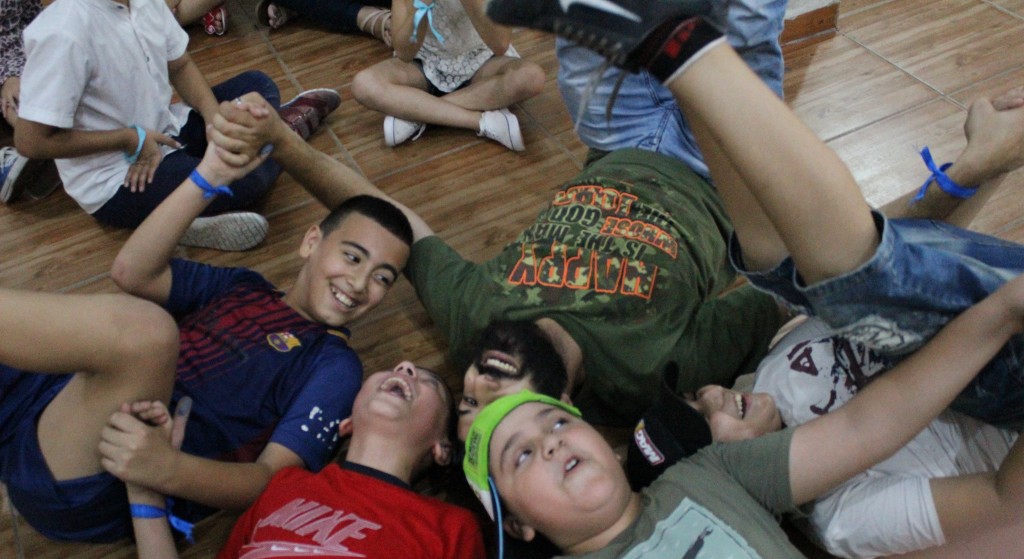 If you are someone who has followed Horizons for a long time, you will know that we are passionate about discipling and equipping new believers! One of the main trainings we do to disciple new believers is called Cubs to Lions in which we walk with individuals through their spiritual journey from cubs to lions. We offer this training annually at different times throughout the year and in many different regions of the world. On the seventh of September, 2018, we held a short Cubs to Lions training for the children’s ministry at our Beirut center. We focused this day of training on trauma and how Jesus can enter into that space and bring healing. This is a critically important topic for all of the refugees but especially for the young children who have no experience dealing with trauma. Most of these children were forced to see their homes destroyed and loved ones die back in Syria, then had to flee from their destroyed cities to a foreign country where they now live in utter poverty. So for obvious reasons they have a lot of trauma to deal with.

In one day, our staff delved into many emotions with the kids to help them process some of the tragic events that occurred in their early lives. With all of these experiences we showed the children how Jesus can enter into all of their feelings and traumatic experiences to bring healing to them. Our day consisted of five main sessions, each of which were based on a biblical text, and included art therapy and games.

The day started early, around seven in the morning, and our staff began by welcoming the children and dividing them into teams according to their age and gender. We received 22 children between 5 and 15 years old. Then we had breakfast, during which each team had to meet and get to know one another. They had some time of fellowship and the idea was to know three facts about each of their teammates so they could later play a game.

Session 1: I am fearfully and wonderfully made

The first session after breakfast was an icebreaker also meant to help the children get to know their teammates and become more comfortable with each other. After the icebreaker we began with art therapy, where the children had to draw themselves the way they think God created them, and to place their thumbprint on the drawing. The point of this exercise was to show them that they were each created by God with a unique thumbprint and we based this off of the Biblical text Psalm 139. Our emotional journey with the children started at this point and already was especially evident with older girls. It was a clear breakthrough with them to see them begin to understand how beautiful and special they are and that they are truly worthy. One interesting experience was with Rony, a 9-year-old boy, who drew himself with big round ears, and wrote down “I am a monkey.” While in a Western context, monkeys are cute and funny, in Arab culture, monkeys have a connotation of being stupid, ugly, and naughty. Our staff talked with him separately from his team and prayed with him in order to help him understand that he is created in God’s image according to His likeness. They told him that he is a handsome child as opposed to what he keeps hearing from his family. After this everyone played together for a short period and staff read to the kids the verse of Zephaniah 3:17. We celebrated our session with worship and ended it with a prayer asking God to seal on the changes that the children have experienced so far.

Psalm 139:14: I praise you because I am fearfully and wonderfully made.

Zephaniah 3:17: The Lord your God is with you, the Mighty Warrior who saves. He will take great delight in you; in his love he will no longer rebuke you, but will rejoice over you with singing.

Session 2: I live in a broken world 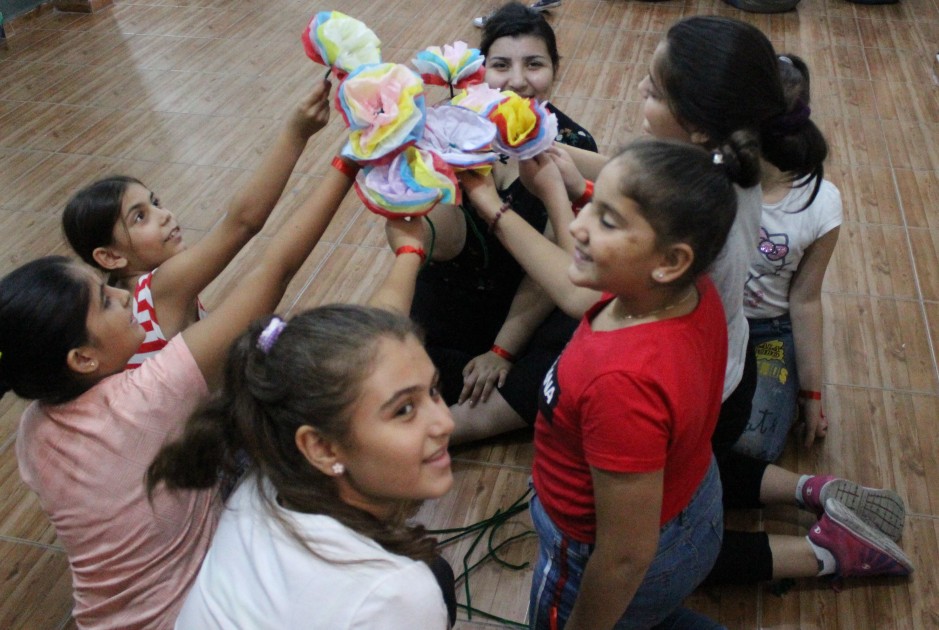 Between sessions, there was a small break for the children so they could relax before entering into another emotional journey. The second session started at 10:15, when all the children were together and we made flowers with tissue paper and pipe cleaners. Our Bible lesson for the session was about sin and how it broke our world and affected the children of God. The idea was for the children to tear apart pieces of the beautiful flower that they made, representing the way sin corrupted God’s beautiful creation. In the end, the Children learned that they are still God’s children even when bad things happen to them and they are still worth His love and it breaks God’s heart to see us like this. After the lesson we played some games to ease the difficulty of the message. Then we watched a video called “the greatest gift” which shares the message of salvation. After watching, the children were very impacted and began interacting with each other and our staff, asking questions like: how can people not believe in Jesus after all the miracles they have seen and experienced? Some asked for tips on how to handle the rest of their family since they have decided to follow Jesus. We all prayed together at the end of the session for Christ to be the center of their lives before moving on with our program.

The children then took a break to play games and were divided into two teams, the old ones and the young ones. They were running around, playing soccer, teaming up and competing with each other. These children usually don’t have a space to play because they live in tightly cramped spaces in a slum that has no open spaces other than the narrow crowded streets. Our staff commented how fun it was to watch the kids just having fun and feeling allowed to be children! Lunch was the quietest time of the day, and followed the games. We had prepared tables for each team with specific spots for each individual and as they went out to find their seats, they were surprised to see their assigned place and felt very special. Each child had a special place to sit with his team, their whole meal was prepared and served for them. “A feast,” as some described it! They enjoyed laughing and talking to each other and sharing much more than just food. It was a very delightful time and staff reported they could clearly see new friendships being built.

Session 3: Jesus can restore me

Third session started around 1:30 and each team had to put together a puzzle in which they colored along the numbers to make a picture that turned out to be a cross. Then each leader showed colored cardboards to the children asking them to express an emotion for each color. This exercise was intended to help them realize that one circumstance can reflect different emotions to each person. It was also to help them start naming their emotions so that they can become familiar with them. Next was an exercise that was intended to teach the kids how feelings can physically affect their bodies. For instance: fear makes our heart beat fast, anger makes our shoulder tense, high sounds make our legs shake. The children were all very involved and interested in this exercise. Some even started reliving some of their own experiences and it was a chance for us to help them.

The bible story we shared was the one of Zacchaeus in Luke; Jesus can only restore your broken world if you seek him out and allow him. After the lesson, we modeled this act of faith. The children went outside and each child took a step up on the edge of the playground. The idea behind this was to imitate Zacchaeus, who was a short man and had to climb up a tree to see Jesus. “Now it’s your turn,” our staff told the children. “Will we climb to see Jesus and by that decide to follow him?” The kids realized quickly that it was a very serious decision making exercise.

Session 4: I have hope and a future

The fourth session started at 3pm and the goal was for the children to understand that they have a future and they can hope and dream again. We started with a game and then for the artistic part, we asked each child to act out what he wanted to be in the future. Then we placed a blank paper on the back of each child and asked his teammates to write or draw something they liked about them. This way each child would know that they are also loved by people around them.

Later for the lesson, we brought in sand and asked them to count it. Of course, they could not! The point was to show them, like psalm 139: 17-18, that God’s plans for us are countless. Then we read and Jeremiah 29:11 and prayed that the Lord would reveal His plans to each one of them and that God would bless them, filling them with His peace.

At this point, the younger kids had some time to play and relax while the older kids were watching videos called “Who You Are”. They were in two groups, separated by boys and girls. Our hopes are that they begin to really understand who God created them to be and to be able to grasp some of their identity in Jesus. It was the perfect beginning for their new lives.

Our last session was very short because it had been a long and emotional day. We wanted the children to have a time to reflect on what they had learned and to let it sink into their lives. This time included worship, to rejoice in the Lord and thank Him for what He had done for us. 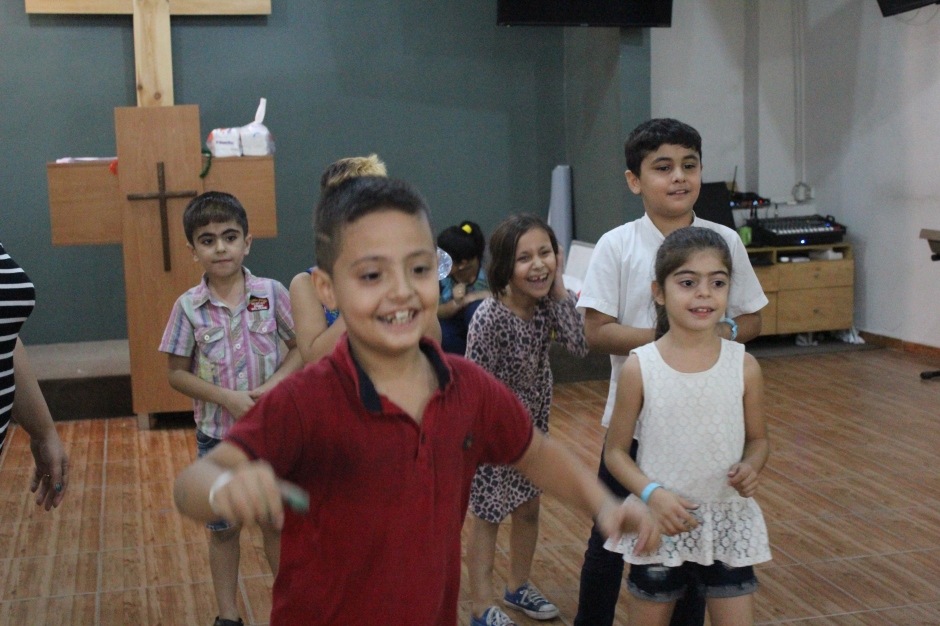 You can bless the children’s ministry with your financial support

If you have a passion for children and want to see more refugee kids blessed by our ministry, we would like to ask you to prayerfully consider supporting our children’s ministry financially. Your support would go to helping cover the costs of the many events put on weekly by our staff to give Children hope and joy in Christ and freedom in their lives.

<You can give at this link here>